Signs in the mountains

I kept seeing the signs. On Overland Avenue in L.A. near where I stopped to visit my sister and nephew, as I walked each morning towards Venice Boulevard to get my morning coffee, I passed three small houses with signs. Psychic. Readings by Maria. Palm readings. Tarot cards. During earlier visits, I'd passed by those houses many times, but this time a part of me wondered, "Should I enter one of these houses — just for the lark of it?
I'm a hardcore skeptic, finding it hard to believe that lines in your hands or a random pick of cards from a deck can tell anything about your life.
The skeptic in me prevailed. I kept walking.
In Boulder I would make a different choice.

Last week I stopped near Boulder, Colorado and spent an afternoon in the downtown Pearl Street district with my friend T. who's recently moved into the area. After a sushi lunch at Hapa, we shared a dessert that T. had promised me looked like a Shiva lingam. She didn't know what it was called. The menu described it as banana bread drenched in toffee sauce. T. was right about its appearance. And it was delicious. Here, take a look at a photo of the one we had already half devoured: 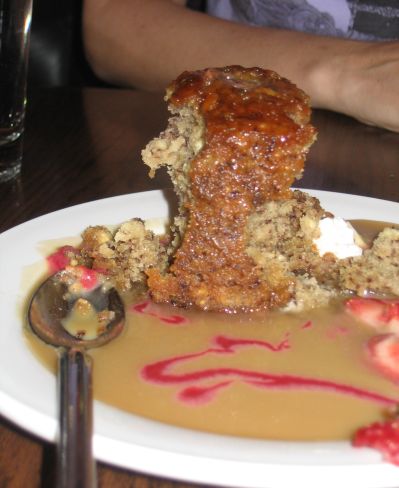 T. is a believer in spirit guides. Knowing I'm not a believer, she sometimes hesitates before telling me the latest update on her spiritual journey. I listen to her. I don't know what to make of her stories, but they are always fascinating. She's convinced I'm stubbornly blind towards my own spirit guides. I give her stories about strange coincidences in my life. They seem to satisfy her in her appraisal of me.
On the way back from lunch, we stopped at a bookstore she wanted to visit. We descended into a basement holding books, music, statues, and other items related to multiple spiritual-religious traditions: from Hinduism to Buddhism and Christianity and Islam (the sufi kind). It even stocked books about UFOs.
While we walked around, bathed in meditative music and the fragrance of incense, a woman emerged from an inside room and asked T. if she wanted a reading. She said her sister inside the curtain did readings. T. said yes and asked if I'd follow her. I said, sure, why not?
While I waited, I got bored and eventually found my way to the UFO section. In a book by a German writer I learned about a place in Peru where there are long lines on the landscape that look like landing strips. I think the book was trying to say these were landing strips for alien spaceships that visited earth a long time ago.
When T. emerged, I went inside. Hanging from the ceiling were pieces of fabric. One hanging carried an image of Radha and Krishna. The tabletop was covered with a white tablecloth with a pattern of smiling sun-face images. I found it reassuring the place looked rather ordinary.
The woman said my friend had told her I believed in nothing. She wanted some information from me. I said I was on my way to Bangladesh to work on a novel. She had me pick some cards with words of wisdom. They were not memorable. She commented that she too had wanted to write a book but doesn't want to any more. Why, I asked. She replied that perhaps it was because she has nothing more to say.
Then she had me choose a deck of cards. But when she handed my chosen deck to me, I asked, now what do I do? Shuffle it. Or you can toss it in the air. Someone once did exactly that. I almost did that too, because I was taking the woman literally. I'm glad I hesitated. So I shuffled the deck.
She said, pick twelve cards and place them on the table in the shape of the structure of your novel. I placed them in a rising line, then a slightly rising plateau, and a sharp final descent. She asked me to randomly pick cards and lay them right side up.
I started with the cards in the plateau. I have a map of my novel in my head and the middle segment is still somewhat fuzzy. The first card from the plateau was reassuring. She said, things would start off well. Then emerged two cards that she suggested involved a death and some mourning on my part. But the final card in the plateau ended with a rainbow — that meant I would finish well. The very first cards of the entire sequence also suggested the journey/book would start well. But with my second card, she said there would be trouble leaving New York and I should watch my briefcase. I don't carry a briefcase, but later in the week came news that flights through Britain had banned almost laptops and books in carry-on luggage. I had planned to carry my laptop with me. Now it looks like I will have to deliver my laptop to the mercies of checked luggage where you don't know if the computer will still be in my luggage at the other end. The whole thing makes me anxious. I should at least take steps to make sure I have backups of my writing before I depart.
The final card was someone sitting pretty and she said I would have a bestseller. In passing, she asked who would edit the book; I said I would. She said, shucks, I was going to offer myself for the job.
It all sounded like hooey to me. T. said ignore all the predictions and just keep in mind the one about your book being a bestseller.
I remain unconvinced, but perhaps I'll make something of the experience by using some of the card revelations in developing the plot of the novel.

God has billboards in Oklahoma!

This site uses Akismet to reduce spam. Learn how your comment data is processed.