Canada, the Atlantic coast and looping back

The great North American road trip is officially over. I started in San Francisco on August 1 and finished in Cincinnati on September 7: thirty-eight days and 7132 miles, passing through some 20 American states and one Canadian province. Someone back in Oakland, listening to me describe my planned stops, had said, oh you're doing a W with a flair. And indeed, though it's a W in the hand of a child, quite zigzaggy, it was a W with a looped flair at the end. Here's photos from the climb up to the northernmost point and the flair.

On a hazy, drizzly Sunday morning, August 27, I crossed the Ambassador Bridge from Detroit into Canada. The Canadian border official asked me why I was so far from California. I said I was traveling across the continent, visiting friends and family, working on a novel. He wanted to know where I had stopped last and where I was headed after Canada. I told him, Detroit, then down to Rochester in New York state. "And all these people support what you're doing?" I assured him they did. He returned me my papers and wished me a safe trip. I was relieved. In present times, relaxed border crossings are no certainty, especially folks like us burdened with names like mine.

A sign on a window in Toronto. Someone should have told me earlier of this promotion. I could have used that money. 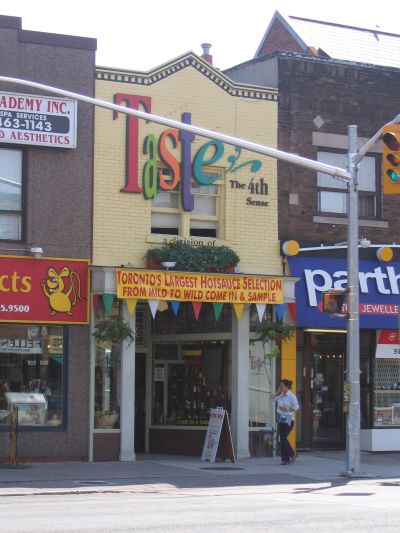 Toronto is one of my favorite cities, a walking city with streetside cafes, immigrant neighborhoods, and unique stores. I was only there for one day, but I did get to walk down Danforth Street, a section of the city I had not visited before.

Here's the Temple to Music in Roger Williams Park in Providence, Rhode Island. Just nine years ago I had a beautiful sunny apartment overlooking this park and this marble structure was one of my favorite spots to visit. After Canada and a one-night stop in Rochester, I drove to the Boston area and would stay there while taking day trips around town, down to Rhode Island, and up to the North Shore of Massachusetts. 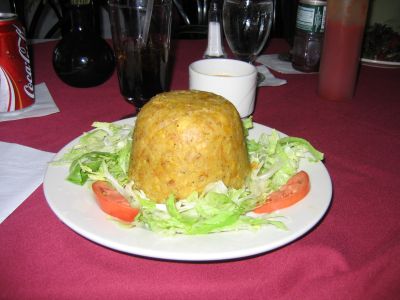 Two of my friends in Providence took me to lunch at a Dominican restaurant. I ordered a mofongo stuffed with shrimp. It's made of mashed plantain and can be ordered stuffed with other meats as well. It was good but I couldn't finish it. (For those who've been following my earlier posts, I have to tell you, when I ordered this dish I had no clue it would be shaped like this.)

I can now say I've gone from the Pacific to the Atlantic coasts. There, you can see the Atlantic. This is from Plum Island on the North Shore of Massachusetts. Unfortunately there was a huge firehose on the road ahead of us preventing us from going closer to the ocean.

It was Labor Day and Newburyport was hosting a street festival. This guy, a contortionist who spoke with an English accent, was very good. 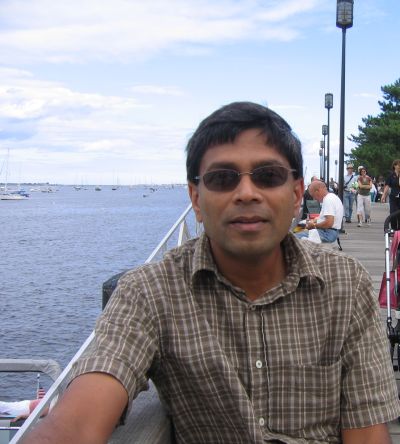 I suppose you may want to see what I look like after making it this far. Here I am along the Merrimac River in Newburyport.

One day I drove around parts of Boston I used to live or frequent many years ago when I lived there. I tried to see if I could find my way to several of the apartments I lived at. Things had changed enough or my memory had slipped enough that I couldn't locate the exact homes in most cases. This one I'm fairly confident was a house I lived at in Dorchester exactly 30 years ago. I got married when I lived here and my ex-wife still remembers the one fall day I spent taking apart and reassembling a Volvo carburetor under the notion that this was what was wrong with my piece of junk car. I did put it back together, though I caused much distress to our relationship in the process. Of course it didn't fix the car problem. She'd been dubious about my theory and she was far better at fixing cars than I was.

I got lost driving around Boston. Trust me, it's not hard. I'll have more to say about that in another post. But this time I was under no pressure to be anywhere at any particular time, so I could just drive around until I found myself on a familiar road. I was so relieved to get on the Arborway and I suddenly got reminded that Boston is a beautiful city — in its architecture, its parks and tree-lined roadways.

Fall seemed to arrive while I was in New England. The temperature turned cool and I had to fish out the one cotton sweater I had carried, just in case. Here and there there would be a spot of bright red in a forest of green. I have to admit, I wished I had time to stay around when the rebellion of the leaves would fully spread.

Now I'm looping back to Ohio. God's messengers are again busy along the highway. This sign was followed by another shouting out, "Hell is real." Is it? 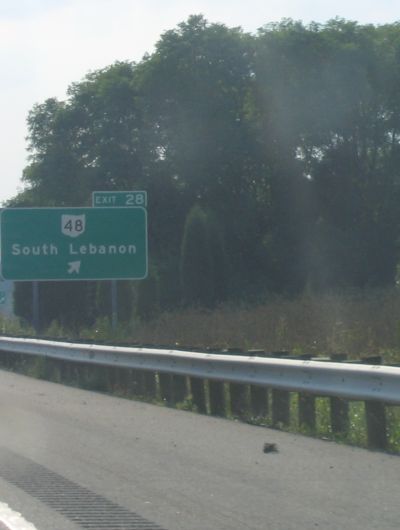 Were it so easy to just get off the highway and find oneself in South Lebanon. This sign was somehow apt as a reminder of the grim world we live in. While I've been traveling across North America, much of Lebanon, the South especially, was being destroyed by a massive assult from Israel. When I started the road trip I remember being sickened to see Condi Rice on TV smugly describing the destruction of a country as the birth pang of a new Middle East. As I end the trip, I still see the old Middle East. I see hatreds reaffirmed such that Israel has assured itself of several more generations of people who will hate them. Is this how you secure a people? Is this how you ensure security?

From the Gulf to the Canadian border

This site uses Akismet to reduce spam. Learn how your comment data is processed.